The second of King Alfred’s two AEC Renowns, 596 also transferred ownership to Hants and Dorset in 1973 and acquired the NBC poppy red colour scheme and the fleet number 2212. It had a reputation for being unreliable and was known as ‘The Duchess’. It was soon sold to dealer Martins of Middlewich and subsequently bought by ‘Spirit of 76’ Tours Inc. of Washington DC. However, they also experienced reliability problems and the vehicle languished for nine years in the sun.

Tracked down by our Chairman, James Freeman, in 1988, 596 was offered to FoKAB as a gift but with only one wheel! Having arrived back in the UK at Sheerness 596 was quickly worked upon and appeared at the 1989 Running Day. Its American registration plate can be seen affixed to the stairway.

596 was repainted in 2019 into the Hants & Dorset livery of poppy red and white with the fleet number 2212, reflecting its post-1973 appearance, and so is easily distinguished from sister 595. 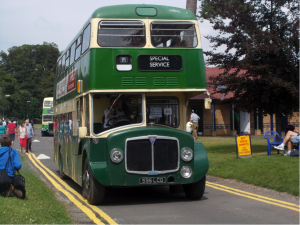