The History of R. Chisnell & Sons

King Alfred Motor Services were one of the few privately owned bus companies to run a municipal bus service. The company was a family business, R Chisnell & Sons Ltd, to give it its official name when it became a registered company in 1939. Its fleet always included the latest types and was every bit as professional as the big bus companies that surrounded it. Yet, all the time, King Alfred buses were proudly independent with the statue of King Alfred on their green side panels to add that ultimate distinction.

King Alfred Motor Services was founded by Robert Chisnell senior, who had many business interests in Winchester, including tobacconist shops, “Sausage Potato & Onion” restaurants and later a garage business. His first involvement with passenger transport was in 1915, using a variety of small motor vehicles to transport troops to and from various camps in the area (because his horses had been requisitioned for war work!).

The first char-a-banc excursion was on Whit Monday, 24th May 1920, using a vehicle based on an ex-RAF Leyland chassis. The destination is not firmly recorded but is believed to have been Bournemouth.  In spite of the unreliability of the early vehicles, the business flourished and the first regular bus services began on 9th October 1922, to the new Council estate at Stanmore via two circular routes, together with another circular, serving Compton, Shawford and Twyford, and a route to Flowerdown.

From these small beginnings, an extensive network was built up, eventually serving most districts of the City and radiating as far afield as Fisher's Pond, Owslebury, East Stratton, Basingstoke, Stockbridge and Broughton. Thus the green and cream buses with the emblem of King Alfred’s Statue on the side became a familiar sight throughout the area.

However, in the early days, there was competition from various other operators on some routes, especially those towards Stockbridge. Even after the Road Traffic Act of 1930 introduced service licensing, this road was also covered by another operator, which changed names and owners several times – successively Empress Coaches, Hants & Sussex, Holland’s Tours of Birmingham and, finally, Buddens. King Alfred eventually had the route to itself when Buddens gave up in 1961.

The 1930s were years of consolidation, resulting from the stability given by the Road Traffic Act. The first generation of vehicles gave way to a fleet of fine modern buses and coaches, with the first double decker being owned in 1942. The coaches were used for excursions, private hires and, from 1928 until 1932, on the London service which operated via Basingstoke and offered several hours in central London.

By the time the Second World War broke out in September 1939, R Chisnell & Sons Ltd., as the company had become, was acknowledged as the local operator for Winchester, with an enviable reputation. The war, however, brought many difficulties – shortages of fuel, rubber, buses and staff. There were also lots of new passengers – servicemen based at the many camps, evacuees, and war workers. As a result, several Ministry of Supply specification buses were bought. These were ‘Utility’ designed and featured amongst other things wooden seats (although thankfully these were later replaced!).

The war also saw the employment of a whole troop of ladies to work as conductors – some of these stayed with the firm for many years! Even so, the Saturday lunchtime journey from Basingstoke needed four relief buses with just one conductor moving between the vehicles!

Robert Chisnell senior died on 5th June 1945, after which his two sons continued to run the company. They were known as “Mr Bob” and “Mr Fred”. The early post-war years were a busy time for all bus operators. This was an era when fuel was severely rationed, power was often cut and there was as yet no television – sometimes a bus was the only warm bright place to be!

Bus travel grew and so did the King Alfred fleet. The first of sixteen Leyland Titan double deckers arrived in 1946 permitting increased services. From 1949 the buses carried route numbers from 1 to 11. As Winchester grew through into the 1950s, the King Alfred route network grew with it. For example, services moved into Minden Way in Stanmore in 1949 and Weeke Estate in 1953. In addition, a number of the remaining local operators were taken over including Greyfriars (who ran to Owslebury and Highcliffe) and Oscar Calloway (who ran from East Stratton).

But the 1950s saw the start of increased motoring. Winchester’s notoriously narrow streets were soon choked with traffic. Often, it would be nothing to take twenty minutes to travel from the Broadway to City Road. The queue for the traffic lights at Southgate Street often started at Ghosts Corner. In such circumstances the provision of a regular timetable became a nightmare and staff found conditions strenuous and unattractive.

Increased traffic thus meant fewer passengers as well as staff shortages. From 1963, the route mileage began to be cut back, particularly in the evenings and on Sundays although new routes to Teg Down and Harestock were introduced. Mr Bob, in particular, waged a one-man war against traffic measures such as the Central Car Park that he said would further reduce the attraction of bus services.

Despite the frustrations caused by these problems, the Chisnells continued their policy of buying high quality, modern vehicles for the fleet. High capacity, low height double deckers joined the fleet. These were initially AEC Bridgemasters, moving on to AEC Renowns and Leyland Atlanteans. New single deckers were introduced bringing the 36-footer to the streets of Winchester in 1962. This policy continued right through to 1971 when King Alfred became the first operator to purchase a batch of Metro-Scania single deckers.

Nonetheless, the particular prosperity of Winchester (having in the 1960s the lowest unemployment rate in Great Britain) meant that obtaining and keeping staff became more and more difficult. Who would want to work unsociable hours in difficult driving conditions for busman’s pay in Winchester? This was especially true when there were highly paid jobs available in the local area – the Ford factory in Swaythling for example. Staff shortages affected all departments, especially engineering. Despite valiant attempts to keep the service on the road, it was something that clearly could not go on forever.

Mr Bob and Mr Fred had, by the start of 1970, reached the age where they looked towards retirement so they started to seek ways in which the business could be sold on. They tried to sell King Alfred to the City Council (which was not possible due to government policy at the time) and then on to other private parties. In the end, events overtook them and with the threat of a Traffic Commissioners’ enquiry hanging over them the Chisnells decided to place their licences in the hands of the Commissioner.

The routes and buses then passed to the National Bus Company, in the form of Hants & Dorset, who had maintained a depot in Winchester for many years for routes to Southampton, Andover, Fareham and Salisbury.

28th April 1973 was a sad day for the Chisnells and for all King Alfred staff, as well as for the travelling public of Winchester and its surroundings. All too soon, the familiar guise of green buses with their proud emblem of King Alfred on the side were swept away, to be replaced by the then all-conquering NBC poppy red paint. For a time, King Alfred Motor Services became no more than a memory.

Time has not stood still for bus operators in Winchester. Hants & Dorset routes were subject to a Market Analysis Report which gave birth to the “Wintonline” local identity in 1980, and in 1983 Hants & Dorset was split up and Winchester routes became part of the network of Hampshire Bus Company Ltd.

When the National Bus Company was privatised in 1987, Hampshire Bus was one of the first companies to be purchased by Stagecoach. In the intervening years, the Stagecoach livery of white, with red, orange and blue stripes became familiar all over the area. The company now operates as Stagecoach South and buses have received a revised livery, still predominantly white but the stripes have given way to ‘swoops’ of the other three colours.  Vehicles operating within Winchester are branded 'the King's city' and feature a bespoke colour scheme designed by Best Impressions.

But the memories of King Alfred Motor Services live on, and the Friends of King Alfred Buses does its best to keep those great memories alive, with all the known remaining vehicles in its collection. 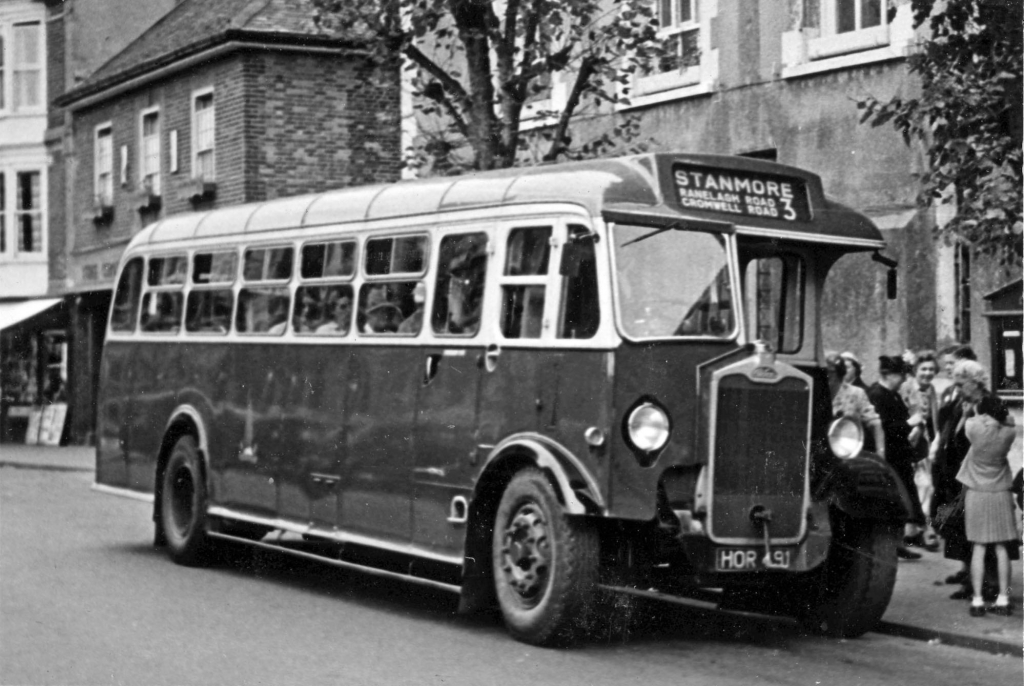