One of two Albion Victors bought by King Alfred Motor Services in 1935, it was followed by another (COT 647) which came in 1938. Two had Duple bodies but AAA 756 had its body built by Abbot of Farnham, delivered without seats as the Chisnells required it to carry the seating from the 1922 Deluxe charabanc.

It entered preservation in 1959 when bought by the Rolls brothers.  It was then bought by David Hurley in 1963.  During his 50 years of ownership it was gradually restored in a specially oversized garage in his garden at home in Worthing and after 1995 when it was complete it was displayed at the Scottish Bus Museum at Lathalmond. Friends of King Alfred Buses was offered the opportunity to purchase it in 2013, which it did following a successful appeal for funds. 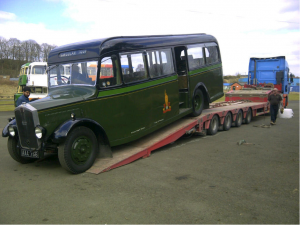 Image: Gently does it. Albion Victor 756 is loaded at Lothalmond for its journey to Winchester