In 2007 419 participated in Plaxton’s centenary event at their Scarborough works and in 2011 received a refurbished roof.  During 2021 it underwent a major restoration of the bodywork by Qualiti Conversions at Botley.  This entailed the replacement of much decayed body framework, then reinstatement of the body panels followed by renewal of the rubber window seals and a complete repaint with authentic King Alfred colours, logos and adverts.  419 reappeared on free vintage bus services at our Running Day on 3rd January 2022. 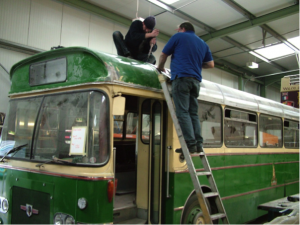